Research has proven that animal therapy can help lift someone’s mood and be therapeutic. Wicksteed Court Care Home in Kettering, Northamptonshire is using innovative robotic pets to provide companionship and improve the quality of life for their residents.

Wicksteed Court Care Home specialises in providing care for the elderly and those with dementia. In January 2020, the home introduced two robotic cats, named William and Harry. After receiving positive feedback on the robotic cats, a robotic puppy called Rex was also introduced for residents that wanted a dog.

Many of their residents either had pets previously or had to give them up to move to the home.

“When people move into the home they can be unsettled, especially if they’ve had to leave behind a pet. We’ve found that using our robotic cat helps to calm people and they really respond to him.” 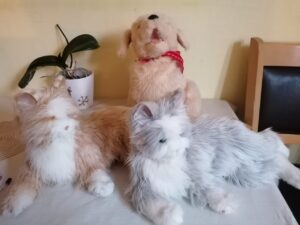 Robotic pets are a relatively new addition to social care. They have inner mechanisms that respond to touch and also make noises from being petted or spoken to. Some of the pets can turn their heads to sound and blink their eyes.

By moving and making life-like sounds, it feels like the real thing.

Research has shown that they can comfort people, especially those with dementia. They’ve been shown to improve mood, reduce stress and support social connection.

They are made from soft faux fur so won’t affect allergy sufferers and are easy to look after.

Robotic pets can ease loneliness by providing companionship. They’re also proven to increase cognitive activity. Research has shown that an effective, drug free way to help calm someone who is living with dementia, is to give them a soft toy they can interact with.

By having something to care for, the pets can help increase meaningful interactions between residents, their family and staff. 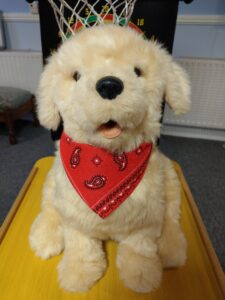 “Because we’ve seen such a great reaction to our robotic pet cat, we’ve recently got a robotic puppy, called Rex. We have a 98-year-old resident who hadn’t talked when he arrived. We gave him the robotic dog to look after, which woofs, and he started to talk. It was such a breakthrough.”

The team says the pets have helped to ease anxiety and increase the quality of life for all residents. They help trigger a happy response, similar to real pets.

“We’ve seen such positive changes, especially with resident’s behaviour and we’ve been able to do it without any drug intervention.”

Advice for other care providers

The team bought the pets from a company called, Joy For All – Companion Pet, which are available on Amazon from £105.

Liam House is a residential home for ten adults with learning disabilities...

Recruiting staff is one of the key challenges we face in social care....