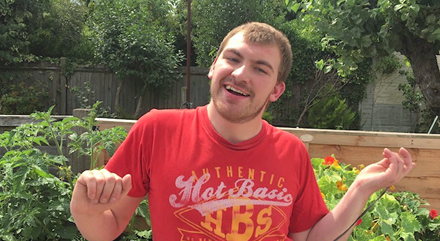 Keith’s experience provided an ideal background for when he later led and implemented a range of large-scale projects that aimed to improve digital technology within adult social care and share information with the health sector. This included a London Project with, at its peak, 60 acute trusts and local authorities sharing information across London.

In this interview with Keith, we talk to him about a project that is dear to his heart. It is called About Me and its aim is to highlight the views of the individual to influence all aspects of their digital health and care records.

The About Me Project

How did About Me develop?

A starting point for me was hearing the stories of people with complex needs who came to significant harm when crucial information about them was not understood or shared. When I say complex needs, this might include people with profound learning disabilities, dementia, physical disabilities, sensory disabilities, long term conditions, mental health conditions, and many more. Sometimes a person may well have a combination of these, which adds to the complexity. In particular, something that stayed in my mind was Victoria’s Story.

I also was aware that many people feel overwhelmed with the amount of information and the number of professionals encountered on their health and care ‘journey’. In addition, some people have significant communication issues and detailing their story can be difficult and frustrating.

About Me information is, quite simply, the most important details that an individual wants professionals in health and social care to know about them. It might include how best to communicate with the person, how to help them feel at ease, reduce their anxiety, for example when having an injection, and who they would like to be with them.

Another example of About Me information is clarity as to how a person takes their medication when a more conventional way is not possible, such as swallowing difficulties. This type of valuable information may not be available now, even though a list of medications and allergies might be shared between health and social care organisations (although certainly not always and rarely by digital methods at this time).

About Me is really something that could help everyone; we all have a different story to tell. Information that does not seem a high priority for one of us might be particularly important for someone else, such as who is looking after a pet when a person is admitted to hospital.

What is the About Me project?

In April 2017, I made a presentation entitled ‘Listen to What I’m Saying’ to the Professional Records Standards Body (PRSB) Advisory Board. The presentation highlighted the range of Care and Hospital Passports that are used in the UK and showed other initiatives across the UK where a personalised approach was key. It also showed the importance of ‘personal preferences’ (later called About Me) and suggested there was an opportunity to ‘develop citizen-led standards that would facilitate the use of electronic solutions’. 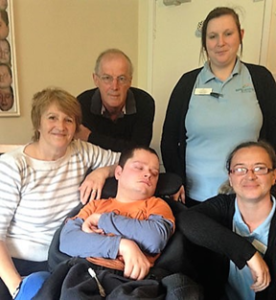 Matthew Prosser – who inspired About Me

At this time, it was my good fortune to meet Tony Prosser, father of Matthew, and Tony remains an inspiration to this day. In fact, a film – Matthew’s Story – was later made by the PRSB and was updated when Matthew sadly passed away in November 2019. Another inspiration was Sam Goncalves, mother of Shane, whom I introduced to the PRSB. Sam made Shane’s Story with the PRSB and is now doing fantastic work as one of  their citizen leads on projects.

From the beginning, the PRSB really bought into the principles of About Me information and how it could form part of national standards. This was shown in two national standards, which Tony and I contributed to, where an About Me section was included: the PRSB Digital Care and Support Plan Standard and the Core Information Standard. The latter is now being used by the shared record programme; the Local Health and Care Record Exemplars (LCHREs).

When the Social Care Programme announced the Digital Social Care Pathfinders in November 2019, it was apparent there was an opportunity to further develop About Me. For three of the Pathfinder sites: Hft, a national support provider for people with learning disabilities (rolling out ‘digital care passports’), and the digital Red Bag Care Home projects in Sutton and South Gloucester, the About Me information was central to their projects. These Pathfinder sites have since worked well together and with the PRSB.

It was a pleasure to bring together these pathfinder projects and the PRSB with the excellent NHS Digital Reasonable Adjustments Flag and National Record Locator teams to improve the chances of About Me information being highlighted and replicated throughout the whole system.

How is the project progressing?

The PRSB initially reviewed many existing hospital and care passports as well as existing literature and there was a lot of commonality, whilst maintaining some differences for individuals with specific disabilities/conditions. From this, with input from the pathfinders, they tried to define a generic About Me standard, which included several categories within it.

These findings were highlighted in online webinars and the PRSB About Me national survey in July 2020. The survey showed that there was strong, broad support for proportionate About Me information. The survey confirmed its use for providing important context from an individual’s perspective for health and social care professionals. The use of multimedia to facilitate this was recognized as being a vital enabler for many people.

Overwhelmingly people wanted fewer categories within the About Me standard and to differentiate between what is ‘really important information’ and ‘what is worth knowing’.

Where are we now?

The draft About Me standard has now been published on the PRSB website. The standard includes a final report with the findings from the survey as well as implementation guidance.

The plan is for the standard to be included in draft in the Core Information Standard by the end of December 2020, with endorsement also being sought from relevant professional bodies and stakeholder groups. Final publication is expected in January 2021.

In the meantime, the relevant pathfinder sites have been encouraged to pilot and evaluate the About Me standard. The aim of this includes testing the process of creating and updating ‘About Me’ information using different media, to make sure it is as easy as possible.

For professionals, there is the opportunity to test the accompanying guidance that will support use of the standard.

It will also be important to continue to work with all system suppliers (such as those in CASPA) and national organisations to see how the standard can enhance shared care records in England. The Reasonable Adjustments Flag and the National Record Locator can help link all of this together.

What have some of the challenges been with this piece of work?

When I first started, it was a challenge because it was new and it really needed the PRSB, and then the pathfinders, to provide a vehicle for the work to develop.

It is also a massive undertaking to try and integrate something from scratch across the whole of health and social care! But I have never lost sight of the overarching aim, which is improving the lives of the people we support.

What are your hopes for the future of About Me?

The vision from the start was to get proportionate, About Me information at the forefront of every health and social care record, even in an emergency.

I would like to see it supported by citizens, patients, parents, and carers who will want reassurance that the information provided will be used.

Work will be required to make sure health and social care professionals are aware of the existence of About Me and of the importance of accessing it and using the information.

I hope then, About Me will be understood for what it is, an essential building block for integrated care and support with benefits for all concerned.

A big thank you to Keith for sharing his expertise and experience.

For more information on the About Me project, please visit the Professional Record Standards Body website: https://theprsb.org/standards/healthandcareintegration/. This link will also take you to four other new standards related to integrated care and support which more than 1000 people helped to develop, including people who use services, carers and frontline professionals.

Look out for scam emails

We have received reports from care providers that they have seen an...

Data Security and Protection Toolkit (DSPT) – What is Approaching Standards?

Data Security and Protection Toolkit (DSPT) – What is Approaching Standards?